Nadia Schadlow & the Reform of Dept. of Defense

Dr. Schadlow’s magnum opus is War & the Art of Governance, it remains a perennial achievement from which to dismantle the chorus of neo-isolationists that insist that Amerika Come Home; if team Trump under McMaster and Mattis are to win throughout the subcontinent and additional regions touching the Eurasian littoral, we’re going to need allies, sound tactical achievements and a bit of luck.

Pakistan still thinks of Afghanistan as its backyard from which to recover from any entanglement with New Delhi.  India wishes to flank Islamabad in its interior.  Moscow is arming the Taliban with Islamic proxies moving down from Central Asia feeding the insurgency.  As it stands now, the American’s cannot afford to multiply their challenges as we desperately need both New Delhi & Islamabad’s help in stabilizing Afghanistan.

When Mattis recovered his position after entering as Secretary of Defense, he admonished everyone within earshot that America had a solvency problem.  He’s clearly thinking about financing ‘the long war’.  He might be alone in that insight with only Senator McCain and Congressman Thornberry.

What the Department of Defense needs is flatter hierarchies, joint platforms; redundancies that assist each service in command mission.  But all these changes remain at the periphery, what we need is to dump the entire Keynesian foundation that underwrites our military industrial complex.

Here’s why:  their are limits to reducing procurement costs, they are, fewer design changes and fixed price competition.  No mention here of having regional allies redesign their own industrial bases, nor is there any mention of strong Statecraft that would openly link our regional objectives to local political economies.  Nevertheless, the above noted reduction in procurement costs have pitfalls.  Fixed price contracts without controlling design changes is useless, and using fixed prices in programs with unproven technologies cannot work.  A brief explanation is needed.

How do defense contractors gain revenue after bidding low?  They seek design changes that drive up costs, often suing the government to recover.  Let’s not forget the miracle of supply side political economies and the inversion of scale that typifies digitization, with a glut of supply and strong economic growth Dept. of Defense should expect cost curves trending down.  This cannot happen with a federal budget swamped from entitlements.

What worked for Reagan can work for Trump, but the Clash of Civilizations will require the entire edifice of Defense and Pentagon to be reformed outside the dominant myopia of Keynesian kraft.

Get ready for the Pentagon and by extension, the Department of Defense to resemble Great Britain during Empire at its ascendancy, with specialized civilians driving both the construction of foreign policy, and its imperial governing.

Dr. Nadia Schadlow’s latest is a glimpse of war outside the confines of the third offset. 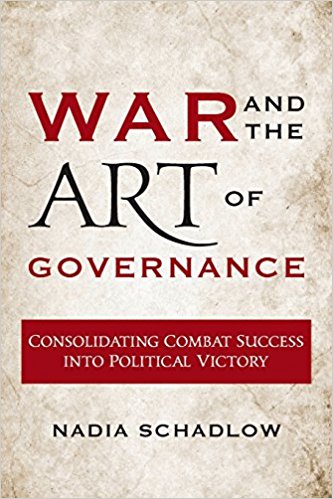